At a ceremony at the American Numismatic Association (ANA) World’s Fair of Money in Philadelphia, Pennsylvania on August 16, Liberty Coin Service Communications Officer Patrick A. Heller was one of five people honored with this year’s ANA Glenn Smedley Memorial Service Award.  The award recognizes ANA members for their efforts to better the ANA and exhibit a positive attitude, strong communication skills, cooperation, and dependability.

END_OF_DOCUMENT_TOKEN_TO_BE_REPLACED 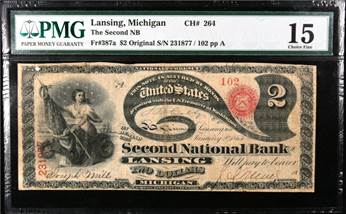 END_OF_DOCUMENT_TOKEN_TO_BE_REPLACED

To celebrate the debut of the US Mint’s 2018 Pictured Rocks National Lakeshore Quarter, on Saturday, February 10 Lansing coin dealer Liberty Coin Service (LCS) will begin giving them away to people who bring to the store non-perishable food or cash donations to the Greater Lansing Food Bank. The event, called the “Cans For Quarters Food-Raiser,” will continue through March 31, 2018. Customers will receive one quarter for each of the first four food items they donate and a 40-coin roll of Pictured Rocks Quarters for cash donations of $25.00 or more.

Said LCS CEO and owner Tom Coulson, “This will be the fourth time that Liberty has celebrated the introduction of a new coin by giving away quarters in a Food-Raiser to support the Greater Lansing Food Bank. We began this tradition in 1999 with the first issue of the Statehood Quarter series, then again in 2004 with the release of the Michigan Statehood Quarter, and once more in 2010 for the first issue of the current America the Beautiful Quarter series. In each of the previous campaigns, we brought in multiple tons of food donations and thousands of dollars in cash contributions. We want to do even better this time around. We thank the Peoples State Bank in Munising, Michigan for providing us a supply of Pictured Rocks National Lakeshore Quarters to allow us to begin this Food-Raiser before the coins will start showing up at banks in the Lansing area.”

END_OF_DOCUMENT_TOKEN_TO_BE_REPLACED A comparison of prices customers were charged on October 16, 2017 by Liberty Coin Service and by the foreign currency exchange service at Detroit’s Metropolitan Airport showed that buyers could get up to 22% better prices at Liberty in small transactions and up to 11% better prices in larger exchanges.

Said LCS CEO and owner Tom Coulson, “When LCS Communications Officer Patrick A. Heller passed through Detroit Metro on the morning of October 16, he snapped a photo of the selling prices for ten different currencies on a sign at the foreign currency exchange service there. After he returned, we compared what customers would pay there compared to our own charges for the same currency. When you factor in the $9.95 transaction charge at Detroit Metro on top of the exchange rate, Liberty’s rates provide customers 18% to 22% more foreign currency for expenditures of $100 and 7% to 11% more foreign currency for purchases of $1,250 US. Even not including the transaction fee, which Liberty does not charge, Liberty provides customers more currency for every currency compared.

END_OF_DOCUMENT_TOKEN_TO_BE_REPLACED

Liberty Coin Service’s Patrick A. Heller To Participate In US Mint Numismatic Forum!

Liberty Coin Service's Communications Officer Patrick A. Heller has received and accepted an invitation from the United States Mint to participate in the Mint's 2017 Numismatic Forum on October 17 at the Mint's headquarters in Washington, DC. The theme of the event is "Numismatics--The Road Ahead." Participation is by invitation only and is likely to be only 50-60 people.

Said LCS CEO and owner Tom Coulson, “We are honored that Pat has once again been recognized by the US Mint with this invitation to meet with US Mint staff. Liberty Coin Service is committed to supporting the hobby of coin and paper money collecting. Consulting with the staff of the US Mint is just one more way we promote the use of money for educational purposes and recreation. Pat participated in the Mint's first Numismatic Forum in Philadelphia last October, the only participant from Michigan, then wrote an article on the event posted at http://www.numismaticnews.net/article/mint-holds-forum that contains extensive feedback and suggestions to the US Mint.”

END_OF_DOCUMENT_TOKEN_TO_BE_REPLACED For his latest batch of insight on Dollars and Sense, Patrick Heller discusses several numismatic and financial stories that have been of interest in 2017.

In this six segment episode he then interviews Dr. Samuel Gregg, Director of Research for the Acton Institute in Grand Rapids.

Patrick then shares with us a conversation he had with Brett Irick from the American Numismatic Association Conference in March 2017.

END_OF_DOCUMENT_TOKEN_TO_BE_REPLACED

On the basis of a 15% increase in customer demand for foreign currency exchange services thus far in 2017, Liberty Coin Service in Lansing has added five more currencies to those it regularly stocks for immediate delivery to travelers. The additional currencies now stocked are from the Czech Republic, Hungary, Iceland, India, and Israel.

END_OF_DOCUMENT_TOKEN_TO_BE_REPLACED

On August 3, during the American Numismatic Association (ANA) World’s Fair of Money Convention in Denver, Colorado, Liberty Coin Service Communications Officer Patrick A. Heller was honored three times. The ANA recognized him as the 2017 recipient of the Exemplary Service Award. From the Numismatic Literary Guild (NLG) he was honored as the 2017 recipient of the Best Dealer Newsletter or Magazine and Best Radio Report.

Tom Coulson, CEO of Liberty Coin Service, said, “The Exemplary Service Award is given to those who have served the ANA and its Mission. Pat has served on ANA committees for twelve years, including eight years as a chair or co-chair. For the past three years, he volunteered his time as an ANA-certified numismatic exhibit judge. In addition, he has been extremely active in promoting the ANA’s mission to use money as an educational tool. Over the decades, Pat has made hundreds of presentations at schools, taught classes on coin collecting, and made countless presentations across the country to Scout organizations, 4-H groups, numismatic clubs, churches, and a variety or adult organizations. He was previously honored by the ANA with a Presidential Award in 2008 and with the Harry Forman Numismatic Dealer of the Year Award.”

END_OF_DOCUMENT_TOKEN_TO_BE_REPLACED

Excerpts from the Annual American Numismatic Association Conference and More

(Including how cities and states could be facing more and more budget challenges going forward, with new reporting requirements).

END_OF_DOCUMENT_TOKEN_TO_BE_REPLACED

LCS’s Heller Helped Change Laws In Four Other States In 2017!

When North Carolina Governor Roy Cooper signed House Bill 434 into law on July 25, a law that exempts the retail sales of legal tender coins and currency and precious metals bullion from sales and use taxes in that state, it became the fourth state thus far in 2017 where Liberty Coin Service Communications Officer Patrick A. Heller helped to change a law.