On October 11, the United States Mint unveiled the common design for the seven-coin series of the 2019 Apollo 11 Commemoratives, where Liberty Coin Service projects that the 5 Ounce .999 fine Silver Dollar will be the most popular choice with the best long-term appreciation prospects.  The US Mint will begin selling these coins on January 24, 2019. 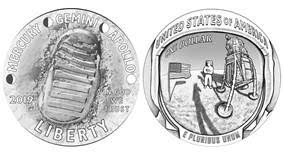 Said LCS CEO and owner Tom Coulson, “Several times over the past two decades, Liberty Coin Service has accurately forecasted selected upcoming US Mint Commemorative coins that were quick sellouts and achieved significant long-term price increases.  That happened with the 1998 Matte Finish Kennedy Silver Half Dollar, the 2001 American Buffalo Silver Dollar, and the 2017 Palladium Eagle.  While we project that all of the 2019 Apollo 11 gold, silver, and copper-nickel Commemoratives will be popular, we expect that the 5 Ounce Silver Dollar, which will represent several “firsts” for the US Mint, will be the fastest to sell out and experience the greatest long-term price increase.”

Although the US Mint began issuing a corresponding 5 Ounce .999 fine Silver Quarter with each new release of the America the Beautiful Quarter series that started in 2010, the 5 Ounce Apollo 11 Silver Dollar with be the first struck in Proof Condition, the first coin of this size of the $1.00 denomination, and will also be the first of this size where the coin will be curved (technical term “scyphate”).  With a mintage limit of 100,000 coins, Liberty Coin Service forecasts that this coin is likely to completely sell out on the first day of sale.

Since its founding in 1792, the US Mint has manufactured the nation’s legal tender coinage needed for trade and commerce.  It also produces coin-related products such as commemorative coins and medals, Congressional Gold Medals, and silver, gold, platinum, and palladium bullion coins.

Frequently-honored Liberty Coin Service, founded in 1971, is Michigan’s largest rare coin and precious metals dealership.  It has been located in Lansing’s Frandor Shopping Center since 1975.