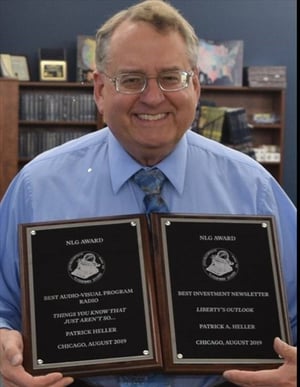 Said LCS CEO and owner Tom Coulson, “Competing against hundreds of coin dealer publications, the Liberty’s Outlook newsletter that Pat writes for Liberty Coin Service’s customers and subscribers has been honored by the NLG three times over the past four years.  His twice-weekly radio commentaries on 1320 WILS AM on Wednesday and Friday mornings under the title of ‘Things You ‘Know’ That Just Aren’t So, And Important News You Need To Know’ have been honored by the NLG for Best Radio Report for the fifth time in nine years.  Providing our customers, readers, and listeners with valuable information they can’t find anywhere else has helped this company develop and sustain a growing and loyal customer base.”

Over his career, Heller has now received a total of 15 national awards from the American Numismatic Association (including the 2012 Harry Forman National Coin Dealer of the Year Award), Industry Council for Tangible Assets, Professional Numismatists Guild (including the organization’s highest award in 2010, the Abe Kosoff Founders Award), and the Numismatic Literary Guild.  He has also received multiple honors from state and local organizations.

The Numismatic Literary Guild was established in 1968 to recognize outstanding written and other forms of communication about numismatics, the study of money.