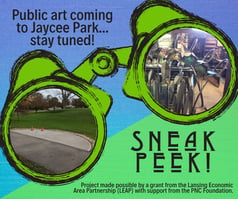 “The attraction and retention of new and knowledge-based talent is a key factor to successful business and economic development in the City of Grand Ledge. The addition of inclusive and culturally significant art pieces in our public spaces helps us do this,” said Mayor, Thom Sowle. “The new LEAP funded public art pieces add vibrancy and creativity to downtown Jaycee Park; a very important space to the Grand Ledge community.”

The new sound garden adds a unique immersive visual and auditory experience to the 6 acres of park along the Grand River in Grand Ledge connected to the downtown. The sound garden is comprised of Flowerbells and “Slap” Pipes created by Traverse City based artist and owner of Tinkertunes Music Studios, Tom Kaufmann. Kaufmann’s work has been featured multiple times in Grand Rapids’ ArtPrize competition, have been installed at schools and parks across the state of Michigan and have even been purchased by Ripley’s Believe It or Not Museum.

Jaycee Park is an active community gathering space hosting numerous concerts, festivals, parades and other community engagement events year-round. With the addition of the sound garden, the city of Grand Ledge continues to evolve the community’s vision for the park connected to downtown as a place that promotes deeper interaction between residents and visitors and connects the community with its roots. The two sculptures in place reflect central elements of the community’s identity, such as greenspace, the riverfront and downtown.

Since 2012, LEAP has invested $240,000 in growing a collection of strategically placed, permanent, public art throughout the Tri-county region, with the PNC Foundation as a strong supporter. The PNC Foundation began contributing $10,000 annually to the program each year in 2015, which helped expand the program and number of pieces funded each year.

“PNC’s ongoing support of LEAP’s public art grant program reflects our Main Street values and commitment to the communities where we conduct business,” said Tim Salisbury, PNC regional president for mid-Michigan. “This program is an example of what can be accomplished through strong public-private partnerships.”

The Public Art for Communities grant program is designed to elevate critical areas in need of further economic development, with an aim toward enhancing community image for the purpose of keeping and attracting top talent and businesses. With 39 individual permanent pieces placed around the region, the PAFC program has contributed in a significant way to the region’s evolving aesthetic appeal for a broad spectrum of businesses.

“In our efforts to attract businesses and talent from around the world, LEAP’s Public Art for Communities Grant program has proven to be a key economic development tool,” said Dillon Rush, Tri-county development & placemaking manager. “Our regional communities have been and continue to be great partners in using public art as a way to enhance public spaces and share community character with the world.”

LEAP captured a FaceBook Live Video from the event today.

About the PNC Foundation
The PNC Foundation, which receives its principal funding from The PNC Financial Services Group (www.pnc.com), actively supports organizations that provide services for the benefit of communities in which it has a significant presence. The foundation focuses its philanthropic mission on early childhood education and community and economic development, which includes the arts and culture. Through Grow Up Great®, its signature cause that began in 2004, PNC has created a $500 million, multi-year initiative to help prepare children from birth to age 5 for success in school and life. To learn more about PNC Grow Up Great, please go to www.pncgrowupgreat.com.