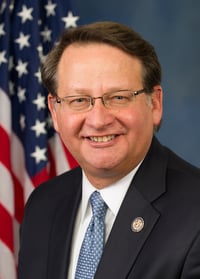 U.S. Senator Gary Peters (MI) released the following statement on the Environmental Working Group’s new study released today mapping the PFAS crisis nationally that shows Michigan with the most contaminated sites in the U.S., which it notes may in part reflect the state’s ongoing efforts to test for PFAS:

DETROIT, MI – “This study confirms what we already know: the PFAS crisis is impacting many communities across Michigan and the country,” said Senator Peters. “We cannot afford to wait any longer to address PFAS contamination — which can have devastating health impacts. That’s why I’m continuing to work on efforts in the Senate to ensure our drinking water is safe, prevent exposure to contamination, reduce harm to human health and expedite clean-up and assistance for affected communities.”

Peters has led numerous initiatives in the Senate to address PFAS. Among his recent efforts, Peters recently hosted a top Air Force official in Oscoda and pressed the Air Force to do more to cleanup PFAS contamination in areas surrounding the former Wurtsmith Air Force Base. The visit came at the request of Peters who had called on the Air Force to work with the state of Michigan on clean-up efforts. In March, Peters helped lead introduction of bipartisan legislation that would mandate the EPA declare PFAS as hazardous substances eligible for cleanup funds under the EPA’s Superfund law – enabling a requirement that polluters undertake or pay for remediation.

As the Ranking Member of the Senate Homeland Security and Governmental Affairs Committee — the Senate’s top oversight committee — Peters is playing a leading role in addressing the PFAS crisis. In March, Peters led a bipartisan effort with Chairman Ron Johnson (R-WI) calling on the Office of Management and Budget (OMB) for more information following reports that a review of the EPA’s PFAS plan was delayed due to intergovernmental disagreement about standards. In addition, Peters led a bipartisan effort including Chairman Johnson requesting that the U.S. Government Accountability (GAO) review the estimated costs to the federal government to clean up contamination.

Prior to that, Peters authored a provision that is now law to allow airports to transition away from using firefighting foams that contain PFAS. Previously, airports were required by law to use these foams based off an outdated specification. Peters helped convene the first Senate hearing on PFAS to discuss the federal government’s role in the cleanup process and convened a Senate field summit in Grand Rapids to hear from affected Michiganders and highlight how federal actions can support local efforts.