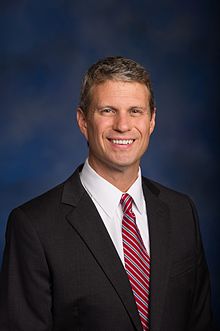 "Congressman Bill Huizenga has long championed the need for pro-banking/pro-economic development in Michigan,” stated Rann Paynter, President and CEO of the MBA. “As a member of the prestigious House Financial Services Committee, Huizenga has focused on removing government-imposed barriers to private sector job creation and increased transparency across the federal government.”

“The entire membership of the Michigan Bankers Association deeply appreciates Congressman Huizenga’s efforts over many years to support and enhance the Michigan economy including efforts to create an environment in which Michigan banks can flourish,” said Tim Jewell, MBA Chairman and President & CEO of Eaton Federal Savings Bank.  “As a small business owner, Congressman Huizenga understands the critical role that banks play in a thriving economy and appreciates the negative impact that over-burdensome regulations and taxation have on the businesses we all depend on to provide jobs in the state.”

Congressman Huizenga was elected to office in 2011 and serves Ranking Member of the subcommittee on Investor Protection, Entrepreneurship, and Capital Markets and serves on the subcommittee on Housing, Community Development, and Insurance. He led the charge on repealing rules from the Obama Administration that hamper the ability of banks to serve customers in ways that are free from overburdensome federal interference.  Huizenga has consistently challenged bank regulators in committee hearings to reevaluate the need for regulation and balance it with the need to serve consumers and communities.  Huizenga’s voting record is consistent with the positions of the industry in creating greater economic prosperity.

He has been the primary sponsor of the following pro-banking/pro-economic development bills:

"Receiving this award from the MBA, the back bone of the local economy, means a great deal to me,” said Congressman Bill Huizenga.  “As a small business owner, myself, I have worked to reduce the regulatory burden on job creators, protect the consumer and help increase the flow of capital across our great state.  Being recognized for my legislative accomplishments as well as my efforts to grow our economy through common sense regulatory reform is an honor I will not soon forget."

Congressman Huizenga is a lifelong resident of Ottawa County, where he resides with his wife and children.

About the Michigan Bankers Association

The Michigan Bankers Association (MBA), the voice of the banking industry since 1887, consists of Michigan financial institutions with more than 2,800 branches located throughout the state. The MBA promotes strong communities and economic activity in Michigan by advancing a positive business environment. MBA assists banks by offering products and services to reduce expenses and increase profitability through the strength of the association.