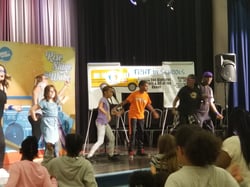 Truth, Racial Healing & Transformation of Metro Lansing (TRHT) launched an educational partnership with Lansing School District on Tuesday, October 23, 2018. TRHT in Schools is designed to engage students, educators and parents through music and education that promotes diversity and unity. A press conference was held at Pattengill School preceding the first in a series of performances by Grammy-nominated group, The Alphabet Rockers and local arts education organization, All of the Above. Performances continued throughout the week in partnership with Lansing Public Schools, East Lansing Public Schools and Dewitt Public Schools.

The Truth, Racial Healing & Transformation framework was created by the W.K. Kellogg Foundation to help individuals and communities uproot and jettison the false belief in a hierarchy of human value. Lansing was selected in 2017 as one of 14 places in the nation to be resourced to implement the TRHT framework. Angela Waters Austin, CEO of One Love Global, serves as Place Lead for TRHT of Metro Lansing.