Is Your Michigan Business Potentially Impacted by PFAS? 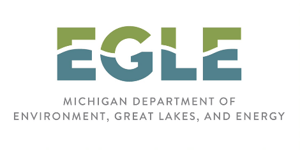 Per and polyfluoroalkyl substances (PFAS) are a group of several thousand chemical compounds widespread in the environment, tainting the drinking water and bloodstreams of most Americans, and linked to a variety of health disorders, including cancer. To date, the Michigan Department of Environment, Great Lakes and Energy (EGLE) has identified 199 PFAS Sites and Areas of Interest in the state. According to EGLE, A PFAS Site is a "property with a valid groundwater monitoring well sample result that exceeds one or more of Michigan's seven PFAS Part 201 groundwater cleanup criteria, and where EGLE has determined the property is the location of the source of PFAS contamination (e.g., a fire training area where PFAS-containing foam was used)." The following graphic presents a breakdown of PFAS Groundwater Contamination Sites by facility type, identified by EGLE. 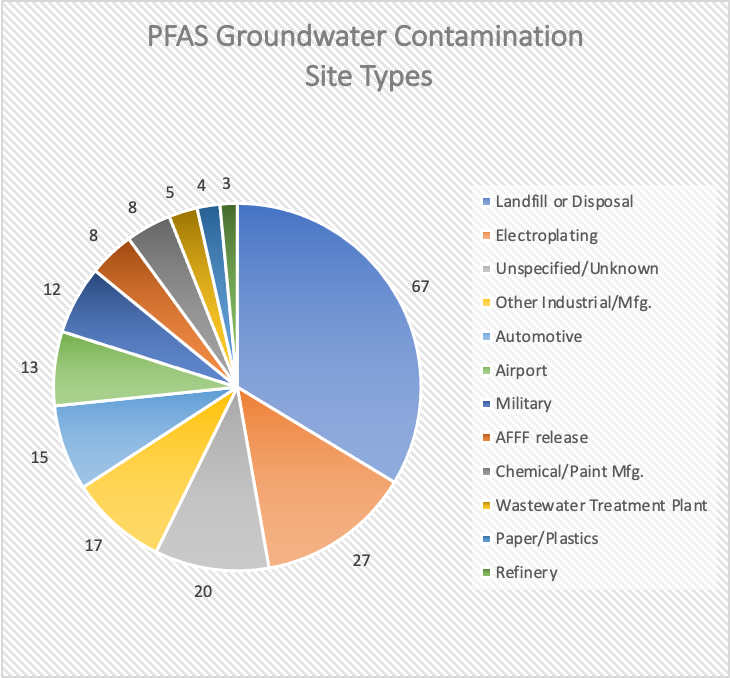 By far, the largest number of sites are landfill, disposal, or dumpsites (i.e., landfills) which account for nearly one-third of the total (34%). This result is not surprising due to the widespread use of PFAS in consumer products ultimately ending up in landfills that may or may not have employed proper engineering controls for leachate.

Next to landfills, the type of business most identified with PFAS releases are electroplating facilities (27 sites, 14% of total). Chrome plating facilities have been an early focus for EPA Region 5 and EGLE's Michigan PFAS Action Response Team (MPART) due to their known, historical usage of PFOS as a fume suppressant to reduce worker exposure to chromium, a known carcinogen. PFOS, along with PFOA, are two specific PFAS compounds on track to become EPA-designated hazardous substances. In March 2021, EPA reissued the final Regulatory Determinations for PFOA and PFOS under the Safe Drinking Water Act.

Rounding out the facility types contributing more than five percent of the total number of sites (10 or more) are: unspecified or unknown release sources (10%), automotive manufacturing (8%), other industrial manufacturing sites (9%), airports (7%), and military installations (6%). However, based on pending Federal EPA requirements, these numbers can be expected to change dramatically due to upcoming state and federal regulatory guidelines. For instance, in June 2021, EPA proposed a rule to require all manufacturers (including importers) of PFAS in any year since 2011 to report information related to:

Once finalized (statutory deadline = January 1, 2023), the rule will be the first targeted effort under the Toxic Substances Control Act (TSCA) to collect information on PFAS manufacturing and will provide EPA with the most comprehensive data set of PFAS manufactured in the United States. Michigan businesses that have used PFAS in their manufacturing processes are bracing now to comply with the pending rule. These include businesses involved in the manufacturing of pulp and paper, paints, plastics, and various industrial chemicals, to name a few.

How PFAS Contaminated Groundwater is Being Addressed Now: A Michigan Case Study

With many PFAS-contaminated groundwater sites coming into view now, it is worth examining proven and cost-effective solutions currently available to treat these sites and eliminate the risk to human health and the environment. As most PFAS-impacted groundwater sites are only now just being identified, very few have entered into an active remediation stage (i.e., cleanup or restoration of groundwater). However, one early pilot test points to a method that is being rapidly adopted and applied in Michigan.

The earliest identified PFAS sites in Michigan were military bases and airports where aqueous film-forming foams (AFFF) containing PFAS, whose use was required by the Federal Aviation Administration for fire suppression testing and training, were released to the environment. One such AFFF-release site is Camp Grayling Airfield in Crawford County, where during 2016, PFAS emanating from historical AFFF usage was discovered to be migrating in groundwater towards the site boundary. In a proactive response effort, the Michigan Department of Military and Veteran Affairs initiated a pilot test project aimed at demonstrating the long-term arrest of a PFAS plume--among the first in the U.S.

The Camp Grayling pilot test involved a novel patented colloidal activated carbon (CAC) material, commercially known as PlumeStop®, which was injected into the subsurface using specialty equipment. Upon injection, the CAC coats the aquifer soil media and functions as a permeable barrier that allows water to flow through it while stopping PFAS movement. Through this unique, patented formulation of CAC, aquifer materials (i.e., sands) are transformed to in-ground filtering media, engineered to remove PFAS in groundwater moving through the barrier for decades. Following the CAC injection at Camp Grayling, PFAS were reduced entirely within one month and have maintained the pilot test reduction goals for more than two years thus far.

Camp Grayling's early pilot test demonstration has led to the CAC treatment method being scoped and applied at numerous other Michigan sites, with consistently demonstrated success. The PlumeStop® CAC system, known as PlumeShield, offers performance warranties from the manufacturer for Michigan businesses that opt for the CAC treatment approach to remediate PFAS-impacted groundwater and eliminate their liability risk.

AUTHOR BIO
Ryan Moore, CHMM, is a REGENESIS PFAS program manager, focused on collaborating with environmental professionals and the industry to communicate effective, proven approaches to manage sites where PFAS contaminants exceed regulatory standards. Moore has managed the use of PlumeStop®, Colloidal Activated Carbon™, available exclusively through REGENESIS, to treat PFAS and other organic pollutants since its inception in 2014. Contact him at rmoore@regenesis.com or (219) 286-4838. Sammy Cummings, CM, development specialist, statewide aviation at the Alaska Department of Transportation & Public Facilities contributed to this article.