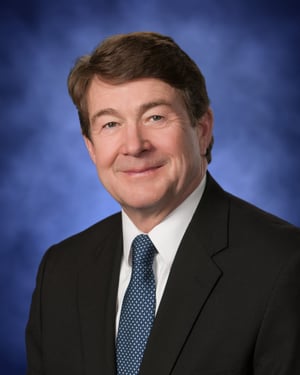 LANSING, Mich., March 26, 2019 - The Michigan Bankers Association (MBA) congratulates Craig Connor, Chairman and CEO of County National Bank (CNB) as the 2019 Banker of the Year. The MBA Board of Directors recognizes an industry leader as the MBA Banker of the Year based on their commitment to the Michigan Bankers Association, contributions to the industry, success of their bank, and a strong record of community service.

“Craig Connor is most deserving of this honor. He has dedicated his career to Michigan banking and the development of our industry’s future executive bankers,” stated T. Rann Paynter, MBA President and CEO. “Craig’s banking career spans over four decades, and he has been devoted exclusively to community banking and exemplifies the professional and leadership qualities set forth in the criteria for the nominees for the award.”

As a resident of Hillsdale, with a 41-year banking career, Mr. Connor began his career at Litchfield State Savings Bank/Michigan Bank Midsouth, then later accepting employment at Adrian State Bank. He served in the positions of Commercial and Agricultural Lender, Compliance Officer, and Vice President of Mortgage Lending. In 1993, Mr. Connor joined CNB in the position of Senior Loan Officer. Mr. Connor successfully navigated the Bank though the financial crisis of 2008. CNB not only survived, but thrived during this difficult period, primarily as a result of thestrength of the Bank’s loan portfolio which Mr. Connor supervised for most of the preceding fifteen years. He became a member of the Michigan Bankers Association Bank Management Committee in 2004 and was elected to the board in 2012. Mr. Connor strives to help others in this field success and guide them to a brighter future through innovative collaborations and ideas.

“I am truly honored to be selected 2019 Banker of the Year by the Michigan Bankers Association” stated Craig Connor, Chairman and CEO of County National Bank.  “The Michigan banking industry has provided me with a rewarding challenging career along with the opportunity to work with and learn from so many outstanding bankers and customers over four decades.  I also want to recognize and commend the strong efforts and advocacy for Michigan banks by the Michigan Bankers Association for the past 132 years.”

“The Michigan Bankers Association has made an outstanding choice in electing Craig Connor as Banker of the Year, said Tim Jewell, MBA Chairman and President & CEO of Eaton Federal Savings Bank. “His commitment to banking and his community is unsurpassed. Hillsdale County National Bank has had great success and growth under Craig’s leadership which is a testament to his abilities.  I’ve known Craig for a number of years and am particularly appreciative of the time he took to help me when I was a young CEO just learning how to guide an organization.”

“For nearly 20 years I have observed Craig’s dedication to community banking and the betterment of the areas we serve, stated John Waldron, President of County National Bank. “He is a great leader and his commitment has resulted in the outstanding bank that CNB has become.”

The MBA will be honoring Craig Connor at its 133rd Annual Convention on Mackinac Island in June.

About the Michigan Bankers Association
The Michigan Bankers Association (MBA), the voice of the banking industry since 1887, consists of Michigan financial institutions with more than 2,800 branches located throughout the state. The MBA promotes strong communities and economic activity in Michigan by advancing a positive business environment. MBA assists banks by offering products and services to reduce expenses and increase profitability through the strength of the association. For more information, visit www.mibankers.com.

About CNB Community Bancorp, Inc.
CNB Community Bancorp Inc. (OTC:CNBB) is a one-bank holding company.  Its subsidiary bank, Hillsdale County National Bank (“CNB”), is a nationally chartered, Bauer 5-Star rated, full service community bank that includes Trust and Investment service divisions, which has been serving South Central Michigan since 1934. CNB has grown to over $662 million in assets and is headquartered in Hillsdale, Michigan.  CNB provides a wide array of financial products and services in its 12 full-service offices and 18 ATMs.