Volkswagen could face hundreds of new state- and local-level lawsuits in the U.S. regarding its diesel emission cheating.

A three-judge panel of the 9th U.S. Circuit Court of Appeals in Alaska says settling charges brought under the U.S. Clean Air Act does not shield VW from similar complaints by state and local governments, Reuters reports.

The ruling could expose VW to “staggering” liability, the judges concede. VW, which promises to appeal, argues that the matter relates to emission control systems, whose regulation lies solely with federal agencies.

VW agreed to pay $15.3 billion in June 2017 to resolve federal charges of rigging its 4-cylinder diesels to evade emission tests. Four months later, the carmaker reached a deal to pay at least $1.2 billion more to fix or buy back U.S. vehicles equipped with doctored V-6 diesels.

The company feels it already has paid for its admitted wrongdoing.

VW admits it used illegal software that enabled its engines to pass federal emission tests but also permitted them to grossly pollute under real-world driving conditions.

The scandal so far has cost the company more than $30 billion worldwide in fines, repairs, vehicle buybacks and environmental remediation payments.

The U.S. court ruling addresses complaints filed against VW by counties in Florida and Utah. Those lawsuits say the carmaker’s cheating makes it liable for local fines of $5,000 per day per illegal engine. That works out to more than $30 million per day, or $11.1 billion per year…just for those two counties. 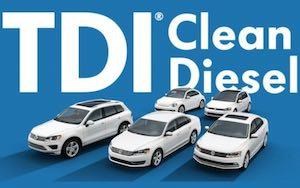 The company points to previous court rulings that “recognized the chaos” if local governments could, in effect, regulate software updates and other adjustments to vehicular emission control systems.

VW believes it properly resolved its exposure to emission violations in the U.S. when it settled federal complaints filed on behalf of the Clean Air Act. The 50-year-old legislation created the Environmental Protection Agency specifically to set and enforce pollution limits.

But the 9th Circuit Court says VW’s predicament is “due to conduct that could not have been anticipated by Congress: Volkswagen’s intentional tampering with post-sale vehicles to increase pollution.”

It isn’t clear what the court means by tampering with “post-sale” vehicles, a key reason for its ruling.

VW wants the 9th Circuit Court to review its own decision and vows to take its case to the U.S. Supreme Court if necessary to escape a new round of pollution violation claims.

The legal issue is a big one, and the company’s argument that emission controls are the sole purvey of federal regulators is a strong one.
---

Stay up to date on auto news via AutoBeat