Chris Holman welcomes Treetops Resort's General Manager Barry Owens to the Lansing studio to review the recent Winter/Ski season a look ahead to the Spring/Golf season as the shoulder season bridges the two. One the events that is coming up is the Big GREEN EGG ‘GRILL ON THE HILL’ hosted by Treetops. More information this event is below this Michigan Business Beat interview.

To hear Barry and Chris discuss Treetops Resort's recent winter and upcoming spring, click play on the PodCast shared below.

Back By Popular Demand – Big GREEN EGG ‘GRILL ON THE HILL’

Are You an EGG HEAD?
Or Just like to Eat Meat and Drink Michigan Brew?
Then Saturday, May 4th is for You!
Treetops Resort to Host ‘Grill on the Hill – EggFest 2019’

The culinary team at Michigan’s Most Spectacular Resort – Treetops Resort tried something new last year at the Top of the Hill and it’s safe to say it was a smashing success! Treetops ‘Grill on the Hill’ is a Big Green Egg Cooking Competition, AKA an “Eggfest.” Cooking teams traveled from near and far to show guests what they could do with these green dimpled ceramic grilling contraptions. Turns out people are literally obsessed with their Eggs – and with what we tasted from the competitors in 2018, it’s (over) easy to see why.

Meat, good beer, live music, and great friends: a combination that surely can’t be beat. Enjoy all three on Saturday, May 4th from Noon to 4 p.m. at Treetops Resort’s second annual Grill on the Hill EggFest sponsored by Meyer Ace Hardware, and BLiS Gourmet. The competition is open to 30 teams that can pick between a 40lb bone in pork butt, 24 racks of St Louis style ribs, 50lbs of fresh chicken wings, or 35lbs of brisket. Each Grill Team will be provided a large BIG Green Egg, which can be used as a grill, oven, or smoker. Competitors will test their grilling skills against some of Michigan’s best, with a cost $200 for a team of up to four people, and includes the meat and all of the Green Egg essentials.

Treetops Resort will be giving awards for the tastiest meat preparation, with the Grand Prize winning team (most votes delivered by spectator judges – that’s everyone who loves to taste test grilled meat fare! ) taking home a Large Green Egg and a free entry into the 2020 Grill on the Hill EggFest.
Attendees of the event will get to sample and judge the competitors finished products, along with enjoying a hand-picked selection of Michigan’s finest craft brews. It’s $30 dollars for adults and free for anyone 12 and under, and includes an official Egg Fest T-shirt if you register before April 15, 2019.

Plan on Staying
Treetops Resort is offering special lodging packages for Competitors and Taste Testing
Attendees Call 866-248-5249, select option #2 to make a reservation.
About Treetops Resort
Treetops Resort is truly the Midwest’s “Must Play” resort and arguably the best collection of golf anywhere in the country, boasting five different courses from renowned designers Robert Trent Jones, Sr. and Tom Fazio. Treetops Resort is also proudly recognized as having the # 1 Par 3 Course in North America: Threetops. Guests can also experience world-class instruction, a spectacular spa, downhill skiing, meetings &
conventions, and a fairytale setting for weddings. Treetops Resorts’ winter offerings include some of the finest terrain perfect for families to enjoy all season long. Treetops Resort boasts 23 ski runs, a terrain park, cross-country skiing, extreme tubing and its signature Culinary Adventure Series that features a Farm 2 Fork seasonal series featuring locally grown and produced fare; a Skiable Feast and Wilderness Sleigh Ride
Dinner series in the winter months.
Treetops Resort is conveniently located on I-75 north just three hours north of Detroit and within one hour of the Straights of Mackinac.
To reserve a Treetops Resort Getaway any time of year, visit www.treetops.com or call 888-Treetops.

And to reserve your Grilling Space for the second annual ‘Green Egg
Fest’ and to learn more about being a spectator/judge for the event visit
https://treetops.com/events/grill-on-the-hill-eggfest-2019/

Big Green Egg ceramic cookers are versatile. Use as a grill, smoker or oven. 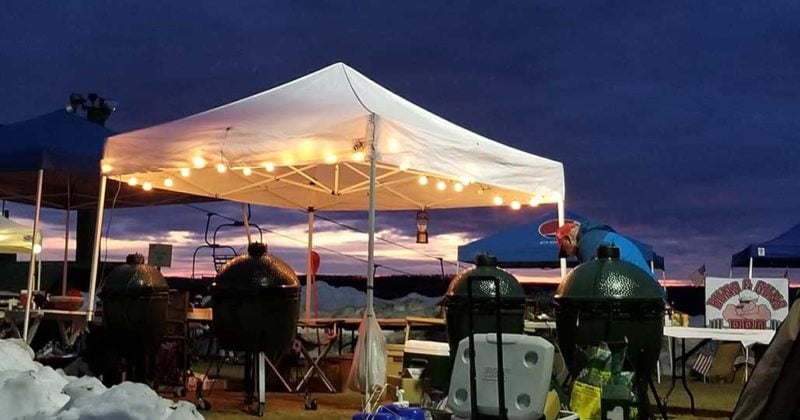 Celebrity Chef’s Grill for EGG FEST
Joe Pichey of Go Blue BBQ and 2016 Big Green Egg “EggFest” National Champion will be at Grill on the Hill grilling up Big Green Egg Favorites for guests to enjoy. Joe is contributor to the https://mgoblog.com/category/tags/tailgate-recipes Tailgate Tuesday feature every week during the UM football season. He teaches grilling classes in Texas where he currently resides. Joe is originally from Flint, Michigan and will be traveling up for the Grill on the Hill for the second consecutive year.

Trace Scarborough will also serve as a celebrity chef during Grill on the Hill. Trace was raised in Brooksville, FL and has been a Nashvillian since 1983, when he moved there for college at Belmont University. Directly out of school, he was a record producer for Warner Bros Records and a Sony Music songwriter. He produced a number of wellknown Christian artists (Michael W. Smith, Kim Boyce, Angelo & Veronica, Vince Ebo) and developed unsigned artists. He also was a mortgage loan officer, graphic designer and lawn service operator before launching Thunderbird. Trace has always enjoyed great food and cooking. He picked up a Big Green Egg in 1999 and attended his first Eggtoberfest in 2001 (the 4th event). There were only 20 Big Green Eggs and maybe 100 attendees that day! Throughout the 2000’s, he carried his Egg to quite a number of Florida Gator football games tailgating with his friends. His Egg has been to every SEC football venue (except Mizzou and Texas A&M). It was during this time that he decided wings were a necessary tailgating food and went to work experimenting with various recipes and methods. By 2006, he had the taste known today as Thunderbird locked down. He had never considered a career in food, but in 2011 things changed. His friends had been urging him to sell his wings for years and he decided to look into it further. After talking it over with the only friend he knew that ran a restaurant, he was encouraged to figure out a way to make it happen. By chance, he had just seen an episode of Throwdown with Bobby Flay on the Food Network where Bobby challenged The Casserole Queens in Austin, TX. Their business model hit him over the head because there was no restaurant needed. They took orders thru their website and delivered them to customers’ doorsteps. Trace also has a food truck and a product line since those early days. His wings became #1 in Nashville on Yelp while he was still only making and delivering them from his home. And Esquire Magazine listed Thunderbird as the Best Wings in Tennessee in 2017.