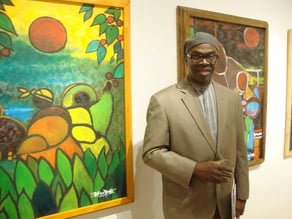 A 6-part PodCast batch for the fourteenth episode [28th overall] of the Magic Hour with Michael McCallum recorded during 2020.

Julian Van Dyke an accomplished Artist, Author, Actor, and Director is the guest for episode 28. This conversation has Michael welcoming a friend to share his experiences in the Lansing, MI, area. Van Dyke moved to Lansing in 1979. His mother and father had passed away, and his grandmother and aunt, too. His older brother was in the U.S. Air Force, and his sister and younger brother had moved to Tennessee. Although he had inherited the family home on Lake Michigan, he felt he needed to go inland to pursue his dreams.

Working mostly in pen and ink at the time, Van Dyke wanted to learn more about painting. He enrolled at Lansing Community College and studied with faculty from a variety of disciplines. His art evolved, retaining elements of comic illustrations, while exploring bright colors, shape and form.

In the 1980s, Van Dyke worked from a studio in the present-day Old Town. He maintains ties to the area, designing occasional posters for the annual Michigan BluesFest and other artistic events. A lover of jazz, he’s also designed posters for the East Lansing Summer Solstice Jazz Festival. From time to time, he’s been seen painting on-site during the June event, setting up easels and creating artworks while musicians perform.  He's also had gallery shows all over Michigan and in New York.
To hear this fun episode with Julian and Michael just press play on the PodCasts shared below!
Michigan Business Network · The Magic Hour with Michael McCallum Episode 28 | Julian Van Dyke Accomplished Creative

During this episode you'll hear:

2) Host Michael McCallum continues the conversation with guest, Artist, Author, Actor, Director Julian Van Dyke as he talks about how he started and the importance of supporting fellow artists.

4) Host Michael McCallum continues the conversation with guest, Artist, Author, Actor, Director Julian Van Dyke. He explains the correlation between his recent Riverwalk Theatre project and the racial injustice in the US.

5) Host Michael McCallum keeps the conversation going with guest, Artist, Author, Actor, Director Julian Van Dyke. The discussion on politics is continued as well as the importance of staying creative.

6) Wrap up with Host Michael McCallum as he asks guest, Artist, Author, Actor, Director Julian Van Dyke about his kid's book 'Does This Make You a Bully?' and his advice for listeners.