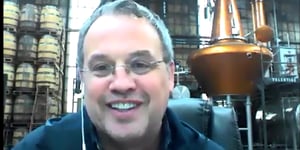 Valentine Distilling Co. started in 2007 and has been making a significant impact in the craft distilling industry ever since. Leadership, employee commitment, and manufacturing an incredible product is what makes this company exceptional. Listen to the interview to hear about the industry and how a small business continues to pivot in our ever-changing environment.

Established in 2007 and among the nation’s first craft distilleries, Valentine Distilling Company is an American pioneer of small batch, handcrafted spirits. When Valentine first started production, there were approximately 15 to 20 micro-distilleries in the U.S. Today, there are more than 2,000.

Mayor Pingree Bourbon has been consistently rated among the best in the world. In 2019, The Whisky Advocate named Mayor Pingree Black Label as the 2nd Best Whiskey in the world in its Summer 2019 Buyer’s Guide, scoring 93 points. In addition, Pingree Blue and Black have won Double Gold medals from the San Francisco World Spirits competition.

Valentine Vodka has been named “World’s Best” by The World Vodka Awards in London back-to-back in 2016 and 2017.

The company’s award-winning bourbon, gin and vodka are available throughout Michigan, nine other states and six other countries. In the tradition of Detroit’s manufacturing leadership, Valentine is dedicated to American ingenuity, quality manufacturing, and small batch distilling using old-world techniques that create superior tasting products. - https://www.valentinedistilling.com/our-story