Silicon Valley-based Nexient has surpassed initial hiring commitments at its facility in Ann Arbor, adding 100 high tech jobs to the region in 2018 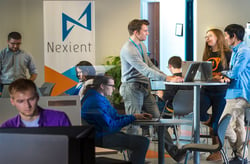 Michigan continues to demonstrate its position as a leading state for tech job growth as California-based IT firm Nexient announced Tuesday it has nearly doubled the number of new jobs the company has added in Michigan this year. Nexient has filled more than 100 positions supporting digital product design, development and quality engineering in the first year since receiving a $1.5 million Michigan Business Development Program performance-based grant from the Michigan Strategic Fund.

In March 2018, the company announced plans to invest $4.17 million to expand its operations in the Ann Arbor region, a project that promised to create 300 well-paying tech jobs by 2020 with the first 60 planned for 2018.

Actual company growth nearly doubled that pace, and the company plans to ramp up local hiring further this month in response to increased demand from Nexient’s corporate clients.

“Our clients need to get to market fast and deliver great customer experiences,” said Nexient CEO Mark Orttung. “Our Ann Arbor presence is helping us assemble nimble ‘product teams on tap,’ combining engineers, designers and strategists to build software people love to use.”

Headquartered in Silicon Valley, Nexient’s primary technology hub is located in Ann Arbor, where company officials point to “a strong talent pool” in the region. Since opening the hub in 2010, Nexient has doubled its capacity and created hundreds of local jobs in digital product design, development and quality engineering. The company has smaller centers in Okemos and Kokomo, IN.

“Michigan’s vibrant tech economy is attractive for fast-growing companies like Nexient,” said Jeff Mason, CEO of the Michigan Economic Development Corporation, which administers incentives and programs on behalf of the MSF. “Michigan is the place where high-tech talent demands can be met, and tech companies can grow. With a strong culture of innovation and learning, our state is a magnet for the software talent they need.”

Nexient is just one of a number of Silicon Valley-based tech companies with recent announcements of expansions and job growth in Michigan:

KLA-Tencor Corporation, a Milpitas, Calif. provider of process control and yield management solutions for the semiconductor and related nanoelectronics industries, announced in October it plans to establish a research-and-development center in the Ann Arbor The company chose Ann Arbor over 350 potential sites in North America. The project is expected to generate a total private investment of more than $70 million and create 500 high-tech jobs.

Samsung SDI Co., Ltd., manufactures rechargeable batteries for the IT industry, auto industry, and energy storage systems, as well as cutting-edge materials used to produce semiconductors, displays, and solar panels. Its US subsidiary, Samsung SDI America, Inc., headquartered in San Jose, Calif., plans to expand its manufacturing presence by creating its first high volume automotive battery pack manufacturing facility in the U.S. in the city of Auburn Hills. The project is expected to generate a total capital investment more than $60 million and create more than 400 jobs.

Duo Security, a cloud-based, trusted access provider protecting the world’s largest and fastest-growing companies, established its Ann Arbor technology facility in 2009. In 2016 the company announced plans to expand its facility in Ann Arbor with a $2.5 million investment and the creation of up to 300 jobs. Citing the flourishing technology environment, attractive business climate, and highly qualified talent pool, the company chose to invest in its Ann Arbor headquarter operations over competing sites in technology heavy-hitters like Silicon Valley. Just last August, Duo announced it was being acquired by San Jose-based Cisco Systems for $2.35 billion – a success that speaks volumes both to the strength of the state’s startup culture and its ability to be a key player in industries beyond just automotive.