LANSING, Mich. -- Governor Whitmer Monday announced that major road repair projects are expected to begin this week across the state. The projects include M-66 resurfacing near East Jordan in Antrim and Charlevoix Counties, Northbound I-75 bridgework in Arenac County, Michigan Avenue resurfacing in Marshall and M-37 resurfacing in Battle Creek and Springfield in Calhoun County, US-41 rebuilding project in Houghton in Houghton County, and M-83 resurfacing near Birch Run in Saginaw County. Based on economic modeling, this investment is expected to, directly and indirectly, support over 655 jobs.

“Across Michigan, we are fixing the damn roads to save motorists time and money. Investments like these in Antrim, Arenac Calhoun, Charlevoix, Houghton, and Saginaw counties will help drivers can go to work, drop their kids off at school, or run errands safely,” said Governor Whitmer. “This year, Michiganders will see more orange barrels and cones than ever before as we move forward at record pace to fix roads and bridges across Michigan. Since I took office through the end of this year, we will fix over 16,000 lane miles of road and 900 bridges, supporting nearly 89,000 jobs—which is 70% more in our roads than the previous four years. And with both my Rebuilding Michigan Plan and the recent, bipartisan Building Michigan Together Plan, we will turbocharge our efforts to fix our roads with the right mix and materials, so they stay fixed, all without raising taxes by a cent. Today’s projects will improve ride quality, reduce congestion, and extend the service life of these critical roads.”

The Michigan Department of Transportation (MDOT) will be investing $279,000 to resurface 1 mile of I-94 Business Loop on Michigan Ave. from Kalamazoo Avenue to Partello Road. This project will improve safety and ride quality for motorists and extend the life of the roadway. Based on economic modeling, this investment is expected to, directly and indirectly, support 4 jobs.

US-41 rebuilding project in Houghton

MDOT and the City of Houghton are investing about $9.6 million to rebuild 1.1 miles of US-41 in Houghton. This year’s work will focus on the segment from Isle Royale Street to Pearl Street and include widening College Avenue to add a center left-turn lane, storm sewer improvements, and city sanitary sewer and water main replacements. Work began in 2021, was suspended for the winter, and is expected to be completed this fall. Based on economic modeling, this investment is expected to, directly and indirectly, support 114 jobs.

MDOT will be investing $4 million to resurface 2.9 miles of M-37 from M-96 to Creekview Drive. Work includes cold milling and hot-mix asphalt resurfacing, concrete curb and gutter, sidewalk ramps, and pavement markings. Based on economic modeling, this investment is expected to, directly and indirectly, support 51 jobs.

MDOT will be investing $1.3 million to resurface 3.7 miles of M-66 from north of Old State Road to south of M-32 in Antrim and Charlevoix counties. This project will improve safety and ride quality for motorists and extend the life of the roadway. Based on economic modeling, this investment is expected to, directly and indirectly, support more than 16 jobs.

Northbound I-75 overnight detour for bridge work in Arenac County

MDOT will detour northbound I-75 to accommodate bridge beam removal at the Lincoln Road overpass. This work is part of an overall $37 million investment to resurface 6.4 miles of US-23 from I-75 to Grove Street in the city of Standish, including repairs to 19 bridges. Based on economic modeling, this investment is expected to, directly and indirectly, support nearly 470 jobs.

Funding for this project is made possible by Gov. Gretchen Whitmer's Rebuilding Michigan program to rebuild the state highways and bridges that are critical to the state's economy and carry the most traffic. The investment strategy is aimed at fixes that result in longer useful lives and improves the condition of the state's infrastructure. 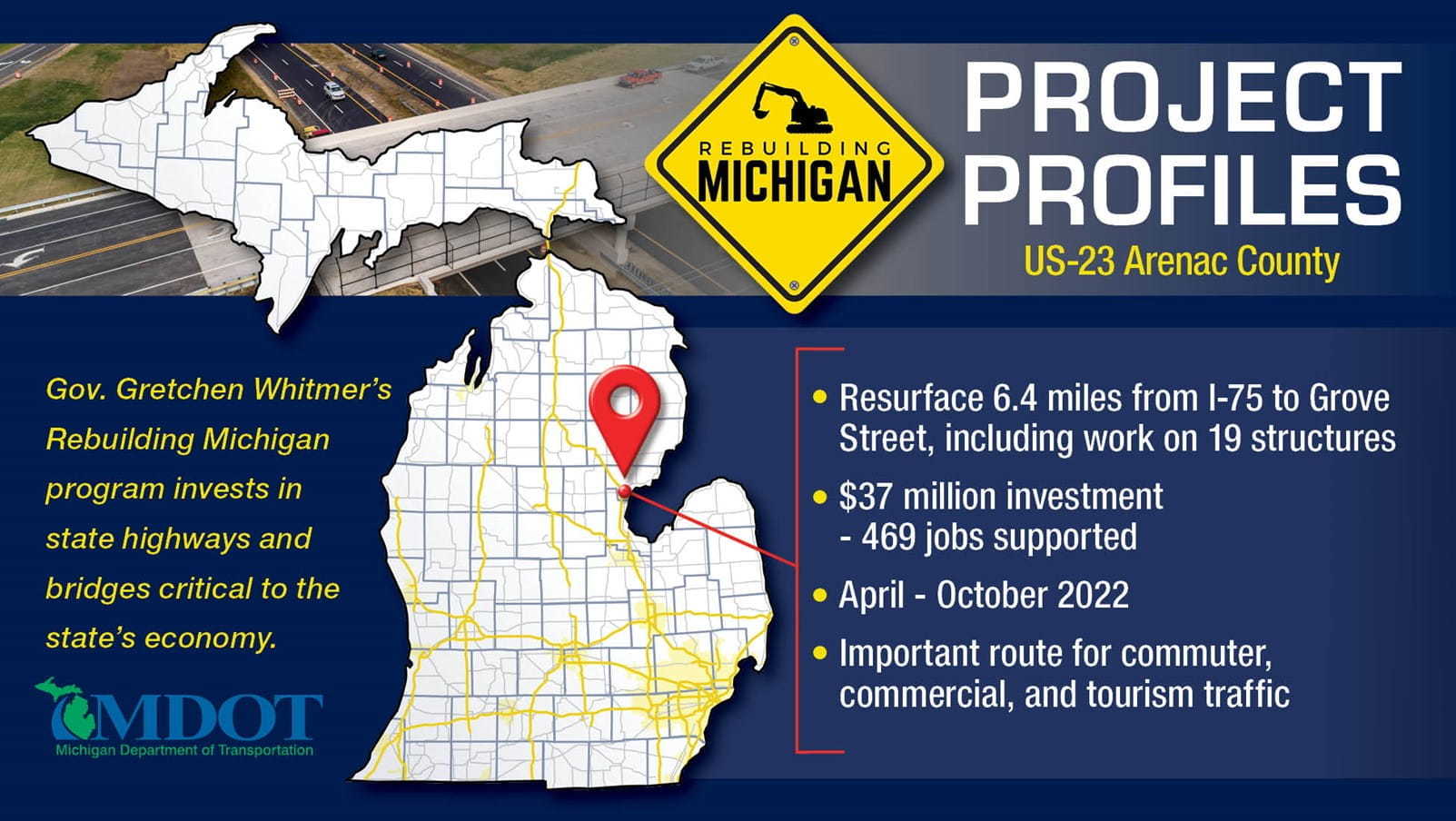 Since Governor Whitmer took office, Michigan has repaired, rebuilt, or replaced 13,198 lane miles of road and 903 bridges, supporting nearly 82,000 jobs. Recently, Governor Whitmer signed the Building Michigan Together Plan, a bipartisan plan to invest nearly $5 billion in Michigan’s infrastructure, grow the economy, create jobs, and benefit families in every region of the state. The Building Michigan Together Plan calls for critical investments of $645 million in Michigan’s infrastructure, including $317 million for road and bridge programs, benefitting both state and local projects.