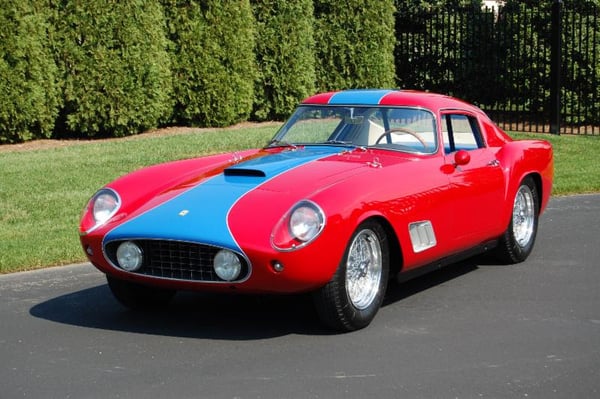 The 2019 Concours d’Elegance of America at The Inn at St. John’s will feature a historic gathering of Ferrari sports and GT cars in celebration of Ferrari’s first of many wins at the 24 Hours of Le Mans. One highly successful Ferrari GT model from the 1950’s was the Ferrari 250 GT LWB Berlinetta Tour de France. Built to competition specifications on a long wheelbase chassis with alloy coachwork, a total of 77 TdF’s were constructed from 1956-1959 in four different versions. After winning the 1956 Tour de France in convincing fashion, Ferrari adopted the name for this model as it continued to dominate the race with victories in 1957 and 1958.

Serial no. 1161 – 1959 Ferrari 250 GT Tour de France, is owned by the Patterson Collection, Louisville KY, and will be featured at this year’s Concours d’Elegance of America, on Sunday, July 28th, as we celebrate “Racing through the Ages – Ferrari”!

"Although I'm a lifelong motor head, my interest in automotive fine art is in the context in which the automobile exists rather than the depiction of the automobile itself. The interplay of the vehicle and its environment and its human operators is to me the most worthwhile pursuit of fine art..." Jay Koka

The board of directors is proud to name Jay Koka as our 2019 Featured Artist. Constantly in demand for his poster work, Koka has been poster and featured artist for many international events... some highlights include the Meadow Brook Concours, Pebble Beach poster artist for 2006 and 2012, for the Ferrari Club of America 15 times to date as well as their 50th Anniversary in 2013, the Barrett-Jackson Auctions, Bloomington Gold Meets, the Louisville Concours, the iconic Daytona 500 and the legendary 24 Hours of Daytona as well as the inaugural Concours d'Elegance of America at the Inn at St. John's for 2011 (a second in 2015) and Cobble Beach Concours of 2013 to 2018 and Stan Hywet Concours of 2014 as well as Eyes on Design for 2004 and 2016.

In 2007 Koka was honored with a 20 year "one man" retrospective show at the National Automobile Museum in Reno, NV, followed by a three month exhibition at the Petersen Museum in Los Angeles.

Mr. Koka will be joined by fellow Automotive Fine Arts Society (AFAS) artists at the Invitation Art Exhibition, Friday, July 26 through Sunday, July 28 at the Inn at St. John's - Plymouth, MI. Come see this spectacular display of automotive art and join us in congratulating Jay!

Koka's original paintings as well as an online catalog of his over one hundred and fifty print and poster editions are featured in two extensive websites located at: