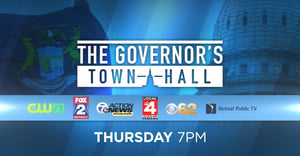 One-Hour Special To Air On All Stations and Tonight at 7 p.m.

For the first time, commercial and public television stations in the Detroit market will partner to produce and broadcast a “Governor’s Town Hall” to provide viewers the opportunity to ask questions of Michigan Governor Gretchen Whitmer during this time of crisis.

The Town Hall will be hosted by Detroit news anchors Carolyn Clifford (WXYZ-TV), Huel Perkins (WJBK-TV) and Devin Scillian (WDIV-TV). Each of those three stations will offer opportunities to its viewers to submit questions for the Governor online that each anchor will ask during the broadcast. The anchors will host from their stations’ respective studios, while the Governor will join from Lansing.

The Town Hall will also be available via websites such as clickondetroit.com, fox2detroit.com and wxyz.com as well as streaming platforms such as Roku, Amazon (Fire) TV, Apple TV, Android TV and Facebook Live.

The general managers of the participating stations believe that combining their collective reach and impact in the community will provide the community with the unfiltered information that is necessary as viewers all cope with the impact of COVID-19, particularly in Michigan, one of the hardest-hit states.

About Detroit Public TV
Detroit Public TV (DPTV) is Michigan's only community-licensed public television station, operating entirely independent of any educational institution or governmental entity.  With more than 2 million weekly viewers across its four channels, DPTV is the state's largest and most watched public television station, as well as having the most diverse public television audience in America. DPTV is licensed to the Detroit Educational Television Foundation and governed by a volunteer board of trustees from the local business, civic and cultural communities. For more information, visit dptv.org

About Fox Television Stations
WJBK is part of FOX Television Stations, which owns and operates 29 full power broadcast television stations in the U.S. These include stations located in nine of the top ten largest designated market areas (DMAs), and duopolies in 11 DMAs, including the three largest DMAs (New York, Los Angeles and Chicago). Of these stations, 18 are affiliated with the FOX Network. In addition to distributing sports, entertainment and syndicated content, our television stations collectively produce nearly 1,000 hours of local news every week. These stations leverage viewer, distributor and advertiser demand for the FOX Network’s national content.

About Scripps
The E.W. Scripps Company (NASDAQ: SSP) advances understanding of the world through journalism. As the nation’s fourth-largest independent TV station owner, Scripps operates 60 television stations in 42 markets. Scripps empowers the next generation of news consumers with its multiplatform news network Newsy and reaches growing audiences through broadcast networks including Bounce and Court TV. Shaping the future of storytelling through digital audio, Scripps owns top podcast company Stitcher and Triton, the global leader in technology and measurement services. Scripps runs an award-winning investigative reporting newsroom in Washington, D.C., and is the longtime steward of the Scripps National Spelling Bee. Founded in 1878, Scripps has held for decades to the motto, “Give light and the people will find their own way.”