Detroit Lions Cheerleaders and Roary will serve as Grand Marshals

LANSING, MICH. — The 22nd Annual Electric Light Parade, sponsored by IBEW #665 and NECA, will take place during the 34th Annual Silver Bells in the City on Friday, Nov. 16, in downtown Lansing. The parade steps off from the corner of Washington Square and Lenawee at 6 p.m. This year, the Grand Marshals are the Detroit Lions Cheerleaders and Roary, the beloved mascot of the Detroit Lions. 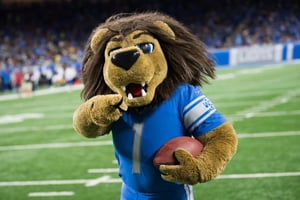 When he’s not on the sidelines of Ford Field cheering on his favorite football team, you can always find Roary bringing countless smiles to faces throughout the community. Whether it’s helping provide food for needy families, teaching children the importance of character, education and staying active, or bringing his humor and upbeat attitude to a special occasion or event, he’s always looking for new adventures and new people to meet!

Paws has been the Detroit Tigers’ official mascot since 1995 and is excited to appear in his first Electric Light Parade alongside crowd favorites and newcomers. Floats in this year’s parade include the Petoskey Steel Drum Band, Michigan State University Rodeo Club, Sohn Linen, Lansing Board of Water & Light, Capital Area District Libraries and more. A full list of parade entries and the parade route can be viewed at www.silverbellsinthecity.org.