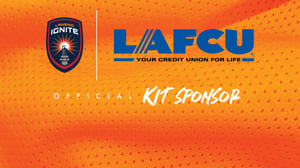 LANSING, Mich. – Lansing Ignite FC and LAFCU, a credit union serving nearly 65,000 members across the state of Michigan, announced today a multi-year contract naming LAFCU as the inaugural kit sponsor of LIFC for the 2019-2023 seasons.

“As an organization, Lansing Ignite FC strives to support and grow our local communities and businesses, and this partnership with LAFCU furthers those efforts,” LIFC President Nick Grueser said. “It’s important to us that LAFCU is locally headquartered, and we believe that LAFCU is an amazing fit because its mission to serve the communities in which it operates in is exactly what we want in a partner.”

To celebrate its partnership with LAFCU, LIFC has created an enter-to-win jersey giveaway ahead of the home opener on April 13 and will host a jersey unveiling party for fans to attend in March. Details for the jersey unveiling party will be announced at a later date, while supporters can enter for a chance to win an LIFC jersey via lansingignite.com.

"LAFCU was an early believer and took an active role from the very beginning to help bring Lansing Ignite FC to the area and attract people from across the state," said Pat Spyke, LAFCU CEO. "LAFCU has a long track record of supporting initiatives to make Lansing a better community for everyone, and stepping up to be the official jersey sponsor seemed like a great way to demonstrate our commitment."

LIFC begins its USL League One campaign against the Richmond Kickers in Richmond, Virginia, on March 30 and against Greenville Triumph SC in Greenville, South Carolina, on April 6. The team will then return home to prepare for its week-long, home-opening celebration. LIFC will hold a celebration in downtown Lansing ahead of the team’s first League One match at Cooley Law School Stadium against the Kickers on April 13, and the celebration of soccer in the Michigan capital will continue three days later when LIFC faces off against the Michigan State Spartans in the Capital Cup.

Founded in 2018, Lansing Ignite FC is led by Majority Owner Tom Dickson, President Nick Grueser and Vice President and General Manager Jeremy Sampson. LIFC is preparing to kick off its first season as a professional club in USL League One, the foundation of professional soccer in the United States. LIFC will begin its League One campaign against the Richmond Kickers in Richmond, Virginia, on March 30, while the team will host its home opener against the Kickers at 7 p.m. ET on April 13. For more information on Ignite FC, visit www.lansingignite.com or follow the team on Twitter, Facebook and Instagram.

About LAFCU
Chartered in 1936, LAFCU is a not-for-profit financial cooperative open for membership to anyone who lives, works, worships or attends school in Michigan and to businesses and other entities located in Michigan. The credit union serves nearly 65,000 members and holds nearly $700 million in assets. LAFCU offers a comprehensive range of financial products and services as well as an expanding complement of financial technology solutions. Members enjoy benefits such as low fees, low interest rates on loans, high yields on savings, discounts, knowledgeable employees and nationwide access to fee-free ATMs and ITMs. A recipient of the national Dora Maxwell Social Responsibility Community Service Award for credit unions, LAFCU enriches the communities it serves by supporting many organizations and causes.