LANSING, Mich. -- Governor Gretchen Whitmer announced that major road repairs are expected to begin next week in two counties across Michigan. The Michigan Department of Transportation (MDOT) projects include I-94/I-69 Interchange work in Calhoun County and culvert replacement along M-142 in Huron County. Based on economic modeling, these investments are expected to support over 2,700 jobs.

“Across Michigan, we are fixing the damn roads to save motorists time and money. Investments like these in Calhoun and Huron counties will support over 2,700 jobs and help drivers go to work, drop their kids off at school, and run errands safely,” said Governor Whitmer. “From 2019 through the end of 2022, we will have invested 70% more in our roads than what was invested over the previous four years. By the end of the year, including the two new projects, we will have fixed over 16,000 lane miles of road and over 900 bridges, supporting nearly 89,000 jobs. Both the Rebuilding Michigan Plan and the bipartisan Building Michigan Together Plan are helping us create safe and reliable infrastructure that will make a huge difference for families and business across the state. I’m proud of what we have accomplished – let’s keep getting it done."

Lane closures are set to begin Monday at the I-94/I-69 interchange as part of MDOT’s ongoing $210 million investment to rebuild I-69 between Island Highway in Charlotte, Eaton County, and I-94 in Marshall, Calhoun County. This work includes building temporary crossovers on I-94, and then will transition into rebuilding both eastbound and westbound I-94 at I-69. Based on economic modeling, this investment is expected to support nearly 2,667 jobs.

Funding for this project is made possible by Governor Whitmer's Rebuilding Michigan program to rebuild the state highways and bridges that are critical to the state's economy and carry the most traffic. The investment strategy is aimed at fixes that result in longer useful lives and improves the condition of the state's infrastructure. 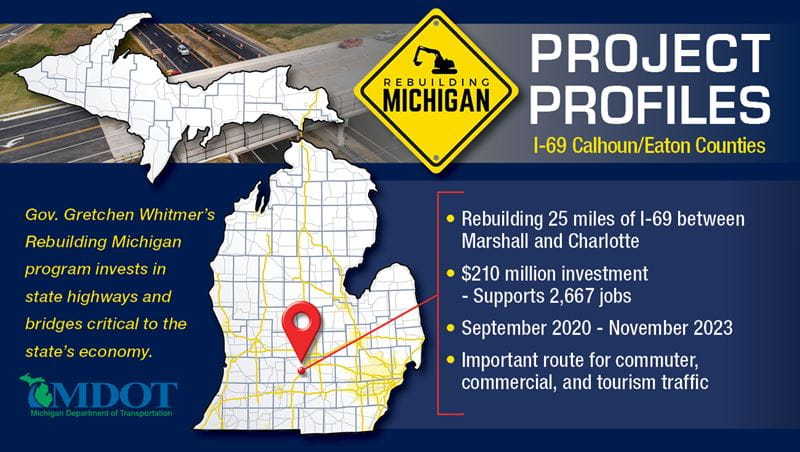 The Michigan Department of Transportation (MDOT) will detour M-142 at Parisville Road to accommodate culvert replacement. This work is part of a $2.9 million investment to resurface more than 4 miles of M-142 from Johnston Road to Ruth Road in Huron County. Work includes intersection and geometric improvements, concrete curb and gutter, drainage, signs, and pavement markings. Based on economic modeling, this investment is expected to support 37 jobs.

Since Governor Whitmer took office, Michigan has repaired, rebuilt, or replaced 13,198 lane miles of road and 903 bridges, supporting nearly 82,000 jobs. Recently, Governor Whitmer signed the Building Michigan Together Plan, a bipartisan plan to invest nearly $5 billion in Michigan’s infrastructure, grow the economy, create jobs, and benefit families in every region of the state. The Building Michigan Together Plan calls for critical investments of $645 million in Michigan’s infrastructure, including $317 million for road and bridge programs, benefitting both state and local projects.