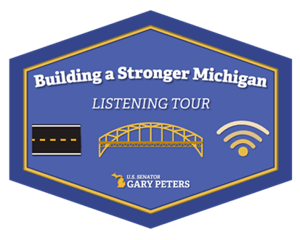 About Need to Create Good-Paying Jobs, Priorities for Strengthening Infrastructure

DETROIT, MI – U.S. Senator Gary Peters (MI) concluded his statewide Building a Stronger Michigan listening tour last week, during which he heard from Michiganders across the state about local needs and priorities to create good-paying jobs, enhance critical infrastructure, such as roads, bridges, broadband, cybersecurity —as well as invest in infrastructure to withstand the impacts of climate change and rising water levels.

These discussions sought to help inform his work as the Senate continues to works to pass infrastructure legislation. These critical investments will boost our ability to compete in a global economy with countries like China by supporting American small businesses and add more jobs here at home. Peters convened roundtable discussions in Grand Rapids, Lansing, Flint, Traverse City, Southfield, and the Upper Peninsula, where he met with leaders in business and labor, as well as local government and tribal officials.

Marquette:
“For several weeks Senator Gary Peters has been touring the state listening to community leaders about their infrastructure concerns and today, he concluded that tour virtually in the Upper Peninsula. Representatives from Northern Michigan University, Invest UP, MDOT, and more organizations spoke about infrastructure needs. The cybersecurity workforce, high-speed broadband internet, and electric vehicles were some of the growing needs Peters was asked to consider in upcoming infrastructure legislation.” … “We're right now in the midst of discussions to pass a broad, bipartisan, hopefully, infrastructure package, understanding that it is much broader than just roads and bridges as important as that is. But in the 21st century, we have to be thinking a whole lot broader.”

Grand Rapids:
“Senator Gary Peters wants to know what you think about fixing infrastructure in Michigan. Today, he held a roundtable discussion at MDOT’s West Michigan Transportation Operations Center here in Grand Rapids. It’s the first of a series of Building a Stronger Michigan listening events happening across the state.”

more Grand Rapids:
“Senator Gary Peters spending his day in Grand Rapids talking about the Biden Administration's plan for infrastructure. He met with stakeholders who shared what they would like to see in the big bill currently being negotiated. Political reporter Rick Albin was with the senator and talked about how he is looking at these talks and how they're shaping up. Rick?”… “Well, Brian, the senator says this is an important bill. He met with a number of people representing labor, Michigan Department of Transportation, and on behalf of the city, Mayor Bliss. Senator Peters said while he would prefer a bipartisan bill, he believes that getting more resources into roads, bridges, water systems, and cybersecurity is so important…Peters argued today the bill needs to be big to help the United States keep up with other countries with superior infrastructure and to pay for repairs and upgrades that have been neglected for decades.”

Holland:
“Following the event, Peters told media while he would like to come to a bipartisan agreement with Republicans in Congress on a national infrastructure package…the importance of investing in infrastructure is vital to the long-term health of the country's roads, bridges, cybersecurity, and climate future. ‘Americans know that roads and bridges need to be fixed,’ he said. ‘They know sewer systems need to be fixed. They know we need to strengthen our cybersecurity defenses. So in a bipartisan way across the country, people want to see this happen.’”

Lansing:
“Michigan Senator Gary Peters continued his statewide tour on infrastructure today. He made a stop in Lansing to talk about Democrats’ investment ideas for the future. Senator Peters highlighted his main areas of concern, which include updates to roads and bridges as well as Internet access for rural areas of the state. He says the best time to make these investments is
right now.”

more Lansing:
“Michigan U.S. Senator Gary Peters made a stop at the capital city today. He met with city officials, and local business leaders as part of what he calls the ‘Building a Stronger Michigan’ tour. Peters says he is focused on rebuilding Michigan’s infrastructure. He is asking leaders what they need when it comes to fixing things like roads, bridges, and internet access…‘Dollars like this from the federal government are going to allow us to fix our infrastructure put people to work doing it and really help to transform this city and every city in Michigan,’ said Schor. Senator Peters also said he hopes the senate is able to pass a major infrastructure in the next few months. ‘We’re hoping we’ll be able to pass something out of the Senate in the next month or two to provide resources to help local communities, to help the greater Lansing area invest in roads and bridges and high-speed broadband internet, looking at sewer systems, looking at really the broad range of infrastructure necessary to have a 21st-century economy,’ said Peters.”

Traverse City:
“Negotiations on an infrastructure package continue in Washington and today, Michigan Senator Gary Peters met with Northern Michigan leaders about what they'd like to see included. They told the senator they hope the infrastructure package can address issues like rural broadband and roads. He said damage caused by climate change and rising lake levels also needs to be addressed. Senator Peters said he's hopeful a deal can be reached in the next couple of months.” … ‘Our basic view is that regardless, we got to get it done. It is just so critical that we invest in infrastructure.’”

more Traverse City:
“Senator Gary Peters continued his Statewide Building a Stronger Michigan Listening Tour. The round table discussion with local leaders included the president of NMC, Munson Health Care, and Traverse City’s mayor, to name a few. The senator heard what local issues leaders feel need to be addressed when it comes to infrastructure spending being debated in Congress right now. ‘In the world, the United States ranks number 13 In terms of our infrastructure, 13,’ Peters said. ‘…We are the greatest country in the world. We have to aspire to be number one.’ Senator Peters said he is focusing on investing in long-term projects to create jobs in our state, and provide a boost to local economies.”

Flint:
“Senator Peters was in Flint earlier today holding a roundtable to talk about infrastructure needs with local leaders in the community… ‘We have to all come together. And it was clear that that's the only way we're going to deal with the underinvestment of infrastructure, over far too many years, is when we come together and spend the resources necessary to prepare us for the future’ ... “Senator Peters says America is currently ranked number 13 in infrastructure. Representatives from the City of Flint, the Chamber of Commerce, and more were all in attendance at the roundtable.”