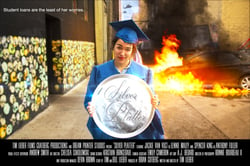 Segment 2: As a student of Grand Valley, Lieber developed skills in production supervision, and digital imaging technology, and he got to use those skills on “Lucky Jay” , starring our own Michael McCallum.  After graduation, Lieber moved to Los Angeles, and worked on TV and film work. “Silver Platter”, written and directed by Lieber is his first big show, and he was fortuitous to travel to San Diego and visit with his 80 year grandfather who co-wrote the script. The story, is dark comedy and tangles in the web of falsehoods, and deeply relevant millennial topics from college loan debt, to job security, and love. Find out more about the film at Lieber’s facebook page : www.facebook.com/timlieber Oh, and Lieber’s getting married next month too! Congratulations!!!