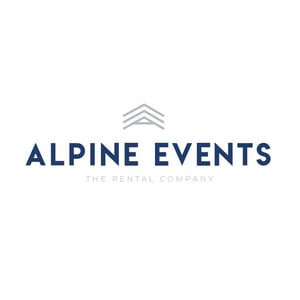 To hear Carey and Jeffrey's extended conversation, press play on the PodCast shared below.

During their conversation hear about:
• Alpine Events, formerly known as Alpine Rent-All has been hard at work rebranding and acquiring The Rental Company (TCR) As a result of the acquisition, the team established a new headquarters, expanded its services and grew its staff.

• The purchase of TRC allows Alpine Events to expand and better meet the needs of its clientele by offering them a ‘one-stop-spot,’ when planning their important event.

• The Rental Company has been present on the Lakeshore for over 20 years and is well known for its experienced staff and high-quality inventory.

Carey Bisonet, (left) is the President and Owner of Alpine Events, which he acquired in 2016. After graduating from GVSU in 2007 with a bachelor’s degree in Business Management, Carey went to work for CSS, a fast-growing security guard company in Grand Rapids, MI. From 2007 to 2011, Carey helped CSS grow from a two-state operation to a nationwide company with offices in 14 states. Carey was serving as a Regional Vice President when US Security Associates acquired CSS in 2011.

In 2012, Carey became a partner in Tyton Holdings, a private firm started by the former owners of CSS. Carey identified and helped negotiate Tyton’s first acquisition in the Bakken Oil Fields in North Dakota. Additionally, he founded Dakota Dumpster, an oil field waste management company. Carey grew Dakota Dumpster to $2.5 million in revenue in three years and negotiated the sale of the business to a competitor in 2015.

Carey also served on the board of directors for Safe Haven Ministries from 2009-2012.