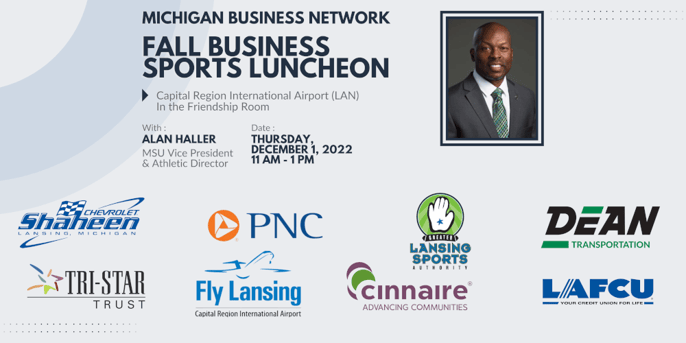 Thursday, December 1st Haller will be the latest Featured Speaker for the MBN Speakers Series - Fall Business Sports Luncheon. Chris Holman has been hosting Business Sports Luncheons since 2004, and MBN has held two events each year since 2017. This upcoming event will be hosted at Friendship Hall in the Capital Region International Airport. More details can be found on this MBN landing page for events.

A former MSU football player and member of the track and field team as well as a former cornerback in the NFL, Haller joined MSU Athletics in 2010, following a 13-year career with the MSU Department of Police and Public Safety. He is credited with being part of the successful efforts to recruit MSU’s all-time winningest coach Mark Dantonio and current MSU head football coach Mel Tucker. He also championed the addition of the department’s inaugural chief diversity, equity and inclusion officer, Dr. Ashley Baker.

In his first year as athletic director in 2021-22, Michigan State finished 41st in the Learfield Directors’ Cup standings, the highest finish for the department since 2014-15. Led by Big Ten Coach of the Year Mel Tucker, the football team won 11 games for just the sixth time in school history and finished in the top 10 of the national polls (No. 8 Coaches, No. 9 AP) after beating No. 12 Pitt in the Chick-fil-A Peach Bowl, marking MSU’s second New Year’s Six bowl win. Six teams earned team NCAA postseason bids, including men’s and women’s cross country, men’s basketball, gymnastics, and men’s and women’s golf. The men’s basketball team extended its Big Ten record with its 24th consecutive appearance in the NCAA Tournament, while the gymnastics team posted a team-record score and a program-best final ranking of No. 9 in the nation.

The Spartans also continued their excellence in the classroom over the past year, extending the department’s run of compiling over a 3.0 cumulative grade-point average for the 23rd straight semester. In the spring of 2022, the department compiled a cumulative 3.2831 GPA, the second-highest in school history. Eighteen teams delivered a 3.0 semester GPA and 19 teams are maintaining a 3.0 cumulative GPA, including five programs (women’s golf, women’s soccer, softball, baseball, and women’s basketball) that posted their highest cumulative GPA in team history. In addition, 371 student-athletes were recognized on the Academic All-Big Ten team, including a conference-best 11 honorees with perfect 4.0 GPAs in the fall, and 126 earned Big Ten Distinguished Scholar honors.

As a member of the department’s senior executive staff, Haller’s career in athletics placed him in numerous leadership positions. His role as Assistant Vice President and Deputy Athletic Director had him responsible for coordination of external relations, capital projects, athletics facilities, and event management. He assisted with the department financial planning and management of the budget, led the facilities planning team, oversaw coordination and completion of a facility master plan, and supervised all athletics construction projects in addition to being a senior advisor to the Athletic Director.

Haller has extensive experience working directly with teams as a sport administrator, including football. He also has led coaching search committees, including playing a prominent role in the hiring of football head coach Mel Tucker in February 2020. Haller previously led the senior staff/sport administrator group responsible for administration of all varsity sports and provided leadership, direction, and supervision to sport supervisors.

As the head administrator of the external relations team, Haller worked closely with athletic communications, marketing and the Spartan Fund to coordinate all aspects of planning, implementation, execution and measurement of the goals and objectives of the department’s external units.

Haller also works directly with campus leadership in providing guidance to the department on a wide range of issues, including serving as a liaison to the General Counsel’s Office, Office of Institutional Equity, Residential and Hospitality Services, Student Affairs, and student governing organizations. He led the reopening/return to campus planning for Athletics Department in 2020 and is currently on committees for the Reopening Campus Taskforce; Community Relations Committee; Race, Diversity and Inclusion Group; and the Clery Compliance Committee.

A former Spartan football letterwinner, Haller’s relationships with current and former student-athletes continues to be an important asset for the athletic department and the overall well-being of the student-athletes. He also helps manage student-athlete conduct and accountability.

Haller led the transition of the Varsity ‘S’ Club into being a fully integrated part of the MSU Athletics Department when was named the executive director in January 2013. The Varsity ‘S’ Club previously was run entirely by volunteer Spartan letterwinners. With the utilization of the resources of the athletics department, the collaboration has enhanced the club’s ability to gather and engage all Spartan letterwinners through more involved interaction.

A four-year letterman as a cornerback for Coach George Perles from 1988-91, Haller earned honorable mention All-Big Ten honors as both a junior and senior and made three postseason bowl appearances with the Spartans (1989 Gator, 1989 Aloha and 1990 John Hancock). The former Lansing (Mich.) Sexton star, who also lettered in track at MSU, was selected by the Pittsburgh Steelers in the fifth round of the 1992 National Football League Draft. Haller spent three seasons in the NFL, playing for Cleveland (1992), Pittsburgh (1992-93) and Carolina (1995).

During the football coaching search in 2006, Haller played a key role in the hiring process of Mark Dantonio, who went on to become the winningest coach in Spartan history, joining former MSU Athletics Director Ron Mason, head men’s basketball coach Tom Izzo, and Mark Hollis on the selection team.

Haller holds a bachelor’s degree in criminal justice from Michigan State and a master’s degree in human resources from Central Michigan.

Tickets are $55 per seat, for more information or to register: