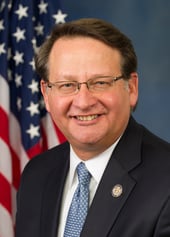 “As elected officials, it is our duty to be responsible with hard-earned taxpayer dollars and prevent fraud, waste and abuse. Unfortunately, the government’s current approach to managing federal property forces many agencies to enter into wasteful, long-term leasing agreements, when owning the property would be more cost-effective in the long run,” said Senator Peters (Shown Left). “Our commonsense, bipartisan legislation would help to save billions of taxpayer dollars by reducing long-term leasing costs and allow agencies more flexibility to acquire property at a bargain price.”

“With our US national debt nearing $23 trillion, we should take commonsense steps to ensure the federal government is not wasting taxpayers’ dollars,” said Senator Lankford. “We should allow for flexibility and innovation to save valuable taxpayers’ dollars instead of forcing agencies to lease, when ownership at times would be more cost effective. This straightforward piece of legislation has the potential to save American taxpayers hundreds of millions of dollars. I look forward to working with my colleagues to pass this bill.”

“With our nation’s infrastructure broken and too often ignored by Congress, I am committed to putting common-sense options on the table that save billions of taxpayer dollars, reduce government waste, and free up money to invest in our crumbling roads and more,” said Congressman Pence. “Sensible legislation like this has the potential to save over $5 billion taxpayer dollars by bringing fair market practices to federal real estate. Hoosiers deserve an efficient government that can meet our 21st Century infrastructure needs.”

“Forcing agencies to lease property when ownership would be more cost-effective is a counter-intuitive policy that blatantly wastes money from hard-working taxpayers. This is a common sense reform that would save millions of the American people’s money - an opportunity Congress should take whenever we get the chance. I thank my colleagues Congressman Pence and Senator Lankford for their work on this important bill, and I look forward to supporting it moving forward,” said Congressman Meadows.

The bill would allow federal agencies to utilize more cost-effective purchase options with Congressional approval in lieu of long-term leases for federal property. This has the potential to save taxpayers nearly $5 billion across the federal government. The bill would prevent costly boondoggles like the recent purchase of new headquarters for the Department of Transportation. Taxpayers paid more than $760 million for the purchase of the headquarters building after several years of leasing the property at a cost of more than $60 million per year.

Senator Peters has long fought to rein in improper and wasteful federal spending by the federal government. In January, Peters’ bipartisan legislation to streamline the federal inventory review process and save taxpayer money by selling or disposing of excess property or supplies was signed into law by President Trump. The U.S. Senate unanimously approved another Peters-led bill to cut wasteful government spending by reducing duplicative, excessive, unnecessary and improperly documented payments, which cost the federal government more than $151 billion in fiscal year 2018 alone. Earlier this year, the Senate Homeland Security and Governmental Affairs Committee advanced a Peters bill that would help save millions of taxpayer dollars by curbing erroneous payments to deceased individuals.