LANSING, MI – Bill Roeser, recently retired President of Sparrow Carson and Sparrow Ionia hospitals, and wife Marcia, a longtime Sparrow Hospital Nurse, have received a surprise special honor in recognition of their many years of service to Sparrow, our Patients, and the community. 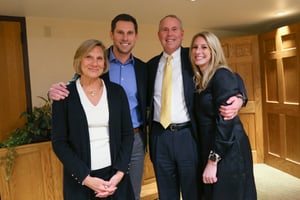 photo (left):Marcia and Bill Roeser pose with their children, Rob and Julia, at this week’s retirement reception.

Sparrow plans to create a pathway on the Sparrow Ionia Hospital property this year named the Bill and Marcia Roeser Walking Trail. A plaque at the start of the trail will be installed to recognize their service.

The trail was a project Bill Roeser worked on since the new Sparrow Ionia Hospital was built in 2015, as it was his wish to see the project completed as a community asset, promoting health, wellness and disease prevention for the greater Ionia community.

The Roesers were stunned when the plan was announced at a reception for the couple this week.

“It’s great because that’s one of the things I’ve wanted to do,” Bill Roeser said. “It’s wonderful. I’m very grateful.”

Bill Roeser retired on Jan. 3 after a nearly 17-year career at Sparrow. He has had a huge influence on Sparrow’s Community Hospitals and on maintaining the highest standards of healthcare for rural communities in Mid-Michigan.

His wife, Marcia, was a well-regarded Nurse at Sparrow Hospital for 25 years, and has been in Nursing for 40 years.

The Sparrow Ionia Foundation is hoping to raise $30,000 through a special capital campaign to pay for a portion of the trail project. For questions or to make a donation, contact Laurie Tjalsma, Manager, Marketing and Communications, Sparrow Ionia Hospital, at Laurie.Tjalsma@sparrow.org.

for Health. for Care. for Life.

Sparrow Ionia Hospital is a subsidiary of Sparrow Health System, a member of the prestigious Mayo Clinic Care Network. As Mid-Michigan’s premier health care organization, Sparrow includes hospitals in Lansing, Charlotte, St. Johns, Ionia and Carson City, as well as Physicians Health Plan, Sparrow Care Network, and the Michigan Athletic Club. Sparrow is affiliated with Michigan State University’s three human health colleges. Through these partnerships and the dedication of our 10,000 Caregivers, Sparrow pursues a vision to be nationally recognized as a leader in quality and Patient experience. For more information, visit Sparrow.org.