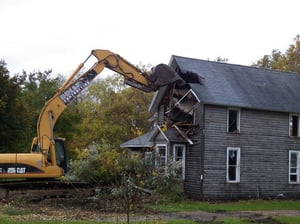 LANSING, Mich. – The City of Newaygo is moving forward with plans to redevelop parts of their downtown as a result of demolition of three blighted buildings, the State Land Bank Authority announced Friday.

“The Michigan Rural Community Demolition Grant has afforded locals the opportunity to develop vibrant communities,” State Land Bank Interim Director Jeff Huntington said. “It’s great to see a city like Newaygo reap the benefit of these funds and the new economic opportunities blight elimination will have for them.”

Demolition of these buildings is funded by the Michigan Rural Community Demolition Grantawarded to Newaygo in April. Nine communities received a total of $350,000 to eliminate blight to prepare for future developments that spark business investment and provide job opportunities for residents.

Prior to the grant award, the buildings sat vacant for three years and the city was unable to fund demolition and move forward with redevelopment.

"Partnership with the State Land Bank has been a key component in preparing the properties on Wood Street for future development. Removing the blighted structures creates a clean slate for expanding our downtown,” Newaygo City Manager Jon Schneider said.

The city plans to build a mixed-use space to include commercial offices on the ground floor and one to two floors of residential units. City officials are working to secure a developer for this project which is slated to begin in early 2020.