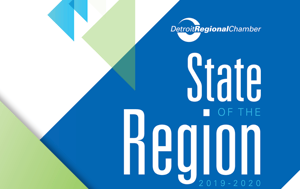 Michigan Business Network was on the road to Detroit, MI at Ford Field for stop #1 of the Michigan Economic Forecast Series. Hosted by Detroit Regional Chamber, they bring the business community the sixth annual State of the Region, which benchmarks the Detroit region’s economic health against our national peers.

“The region has continued to progress over the past year. Job growth, office and industrial vacancy rates, and median home values are all a testament to that. Over the past five years, the region has experienced significant median household income growth of 15.3% since 2014, rising to $60,513.” State of Region Annual Report.” Sandy K. Baruah, President and CEO of the Detroit Regional Chamber