LANSING, Mich. – Warm weather is just around the corner, and Pure Michigan is launching its latest advertising campaign designed to inspire travel in Michigan this year. Starting today, audiences across the United States will once again see the award-winning Pure Michigan advertising campaign on the airwaves. In addition to the broadcast commercials, travelers can plan their perfect vacation with the help of various digital platforms and resources available on michigan.org. 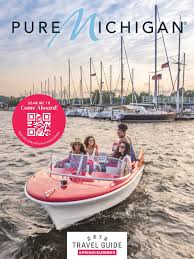 “Warmer weather is upon us, and our new advertising campaign is designed to introduce new audiences around the country to the beauty and diversity of Michigan’s destinations, while also highlighting those activities we excel in – golf, freshwater fishing, and water recreation,” said Dave Lorenz, vice president of Travel Michigan, part of the Michigan Economic Development Corporation. “We are continuing to evolve the campaign to inspire travel to, and within, the state using both traditional marketing methods, but also looking to new trends and technology to amplify the message about the opportunities for the perfect summer vacation or getaway in Michigan.”

The national advertising campaign will include a brand new television commercial featuring the Upper Peninsula this year. Titled ‘Heart Rate,’ the spot highlights local talent and includes a number of beloved and well-known U.P. locations, including Pictured Rocks National Lakeshore, Tahquamenon Falls, Kitch-iti-kipi, the Mackinac Bridge and others.

“Michigan’s Upper Peninsula offers attractions unmatched anywhere else,” Lorenz said. “The new commercial includes many well-known U.P. destinations that may still be hidden gems for many travelers around the nation and the world, and it is sure to inspire new and seasoned visitors alike to come experience all the U.P. has to offer.”

In total, these ads will air on 15 national cable channels as well as on national network broadcast programming in targeted markets and Connected TV streaming experiences. The national cable advertising campaign will run through the beginning of June.

The Pure Michigan advertising campaign continues to deliver an overwhelmingly positive impact for the state’s economy, according to a new study released at the 2019 Pure Michigan Governor’s Conference on Tourism.

The report, released by SMARInsights, highlights key insights into both the economic impact and the effectiveness of the campaign in motivating out-of-state trips to Michigan for leisure travel. It found that in 2018, more than 2.1 million trips were made to Michigan from outside of the state as a result of exposure to the Pure Michigan campaign. These visitors spent $2.5 billion in communities and local businesses across the state.

Additionally, the report found that awareness and recall of the Pure Michigan ads were high, especially with television ads. Michigan is perceived as excelling as an outdoor destination, particularly for water-based recreation. Michigan is also perceived as having excellent culinary experiences, vineyards, breweries, night life, culture and urban experiences. Michigan has also been able to set itself apart from other Midwestern states as a leisure travel destination.

“This report supports what we’ve been hearing from businesses and destinations across the industry – 2018 was another strong year for tourism here in Michigan,” said Lorenz. “We are proud to work hand-in-hand with Michigan’s tourism industry to continue to deliver an economic benefit to the state through the Pure Michigan campaign.”

The result of these trips and visitor spending was a return on investment (ROI) of $9.28 for the Pure Michigan campaign in 2018, compared to $8.99 in 2017. In 2018, $16.5 million was spent on the out-of-state Pure Michigan advertising campaign in regional markets and the national cable advertising campaign, while out-of-state visitor spending motivated by the campaign supported $153 million in state tax revenue.

The 2019 Pure Michigan Travel Guide is also now available both as a free magazine or a universally accessible digital guide. Saugatuck, Mich. is showcased on the cover, with feature stories that include Visit with Ease, It’s a Shore Thing, Go to the Dark Side, and Party of Few.

The Pure Michigan Travel Guides may be ordered at michigan.org and are also available at the 14 Welcome Centers across the state.