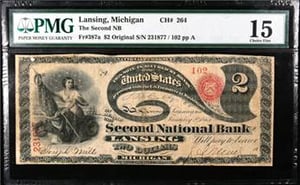 The US government began to issue a variety of banknotes after the start of the Civil War to help finance government debt which, at the time, was primarily the costs of the War.  In 1863, the National Banking Act established a system of National Banks which could issue National Bank Notes under federal supervision.  In 1864, a 2% excise tax was imposed on all other non-federal currency issues to discourage such issues from competing with those of the federal government (this tax was raised to 10% in 1865 and later to 20% to effectively bring an end to non-federal paper money).

Other than some of the earliest issues such as with the note pictured above, each National Bank Note bore the issuing bank’s national charter number.  Each National Bank Note also prominently displayed the name, city, and state or territory of the bank (in lieu of “United States of America”).  Each Note featured two serial numbers, one for the US Treasury and one for the individual bank.  Each note also bore four signatures.  For most of the National Bank Note-issuing era, the signatures of the Register of the US and the Treasurer of the US were printed on the notes.  Then there were two signatures of officials of the specific bank, usually the president and the cashier.  On early National Bank Notes, local bank signatures were written by hand; later these were printed.

As with other US paper money issues up into the early 20th Century, National Bank Notes featured elaborate and intricate artwork.  The $2.00 Lazy Deuce, for example, features a vignette of “Stars and Stripes” on the left of the front with a large horizontal “2” to the right (hence the nickname “Lazy Deuce”).  The central design on the back portrays “Sir Walter Raleigh Presenting Corn and Tobacco to the English.”  Early National Bank Notes also feature artwork at the left of the reverse that is similar to the state or territorial seal where the bank was located, such as for Michigan on this Note. 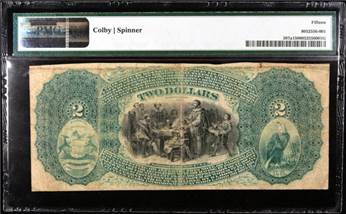 Of these notes, first issued in early 1865, there are three known surviving specimens—2 of the $1.00 Notes and the $2.00 Note just acquired by Liberty Coin Service and pictured here.  One of the $1.00 Notes was issued in 1873-1875 as it has the signatures of Hiram H. Smith as then Bank president and Ephraim Longyear as Bank cashier.  The other $1.00 and the $2.00 Note were almost certainly placed into circulation during the Civil War.

Of these latter issues, only two surviving specimens are known—a $1.00 and a $5.00 National Bank Note.

By the way, any $2.00 Lazy Deuce National Bank Notes are prized rarities.  In a 2006 census, only 37 known surviving Lazy Deuces were known for all Michigan National Banks combined.

Other Lansing National Banks That Issued US Paper Money

US National Bank Notes were issued for four other Lansing, Michigan Banks.

Capital National Bank held federal charter #8148.  It was organized in 1906, with Oldsmobile founder Ransom Eli Olds as its driving force.  Olds served as president from 1906 to 1931, then as chairman of the board from 1931 until it closed in 1934.  The appearance of Olds’ signature on these notes make them popular with numismatic and automotive history collectors.  This bank also failed during the Great Depression, being placed into conservatorship in 1933 and then receivership in 1934.  Some assets and virtually all personnel were taken over by Lansing National Bank.  Capital National Bank issued 517,355 National Bank Notes with almost 200 known surviving specimens.

US National Bank Notes were issued for thousands of cities and towns across the country.  The local bank officers who signed them were often the “Who’s Who” of the city’s or town’s history.  Just in Michigan, for example, National Bank Notes were issued for 280 Banks in about 140 cities and towns.  Collectors enjoy owning a piece of history from their hometowns or other places that have significance to them or collecting issues from an entire state or region.

Since 1971, Liberty Coin Service has helped collectors, beginning to advanced, enjoy the hunt for their favorite National Bank Notes, especially those from Lansing, Michigan.  Your inquiries are welcome.