IONIA, MI – Bill Roeser, an exceptional leader at both Sparrow Ionia and Sparrow Carson Hospitals, is retiring at the end of the year. 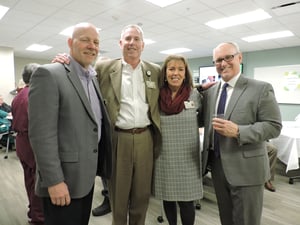 Photo caption: Bill Roeser (second from left) poses with hospital leaders during a recent retirement reception. Roeser is retiring as leader of Sparrow Carson and Sparrow Ionia after an illustrious career.
Roeser was honored by Caregivers at both hospitals that he led with tireless dedication. Roeser has been a mainstay of Sparrow’s Community Hospitals. He began his career at Sparrow in March 2003 as Vice President and Chief Operating Officer of Sparrow Clinton, was named President and CEO of Sparrow Ionia in June 2007, became interim leader of Sparrow Carson in February 2018, and transitioned to the permanent role as President of Carson and Ionia in April 2019.

Among his achievements were overseeing construction of the new Sparrow Ionia Hospital; helping Sparrow Ionia become the first Critical Access Hospital in Michigan to achieve LEED certification as a leader in meeting environmental standards; and guiding Sparrow Carson and Sparrow Ionia to achieve accreditation from The Joint Commission and Level IV Trauma Center status for the first time.

For more information about Sparrow Carson, go to Sparrow.org/SparrowCarson.

for health, for care, for life

Sparrow Carson Hospital is a subsidiary of Sparrow Health System, a member of the prestigious Mayo Clinic Care Network. As mid-Michigan’s premier health care organization, Sparrow includes hospitals in Lansing, St. Johns, Ionia and Carson City as well as Physicians Health Plan, , Sparrow Medical Group, Sparrow Care Network, and the Michigan Athletic Club. Sparrow is affiliated with Michigan State University’s three human health colleges. Through these partnerships and the dedication of our 10,000 Caregivers, Sparrow pursues a vision to be nationally recognized as a leader in quality and Patient experience. For more information, visit Sparrow.org.