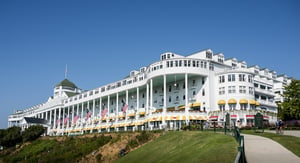 Ken Hayward is Executive Vice President and Managing Director of Grand Hotel, a historic and award-winning 397-room hotel built in 1887. Located on Michigan’s Mackinac Island and open seasonally from May – October, Grand Hotel is the world’s largest summer resort.  Ken oversees the overall operation of the hotel. In addition, he manages various departments such as sales, marketing, conventions, and finance.

Ken began his career at Grand Hotel in 1985 as a sales representative after a great experience at the University of Michigan.  Active in college baseball, Ken was selected to the All Big Ten Baseball Team four times, was named captain of the 1985 Michigan Baseball Team, was the 1984 Baseball Most Valuable Player, and was awarded the 1985 Bob Ufer Athlete of the Year Award and the Big Ten Medal of Honor.

We talk baseball, hotels and his role in leading one of Michigan's most iconic family owned businesses!  Take the time to hear Ken's compelling story!

Leadership Low Down, hosted by Vic Verchereau, provides positive and practical principles for leaders who want to multiply their influence and take their team to the next level of effectiveness.